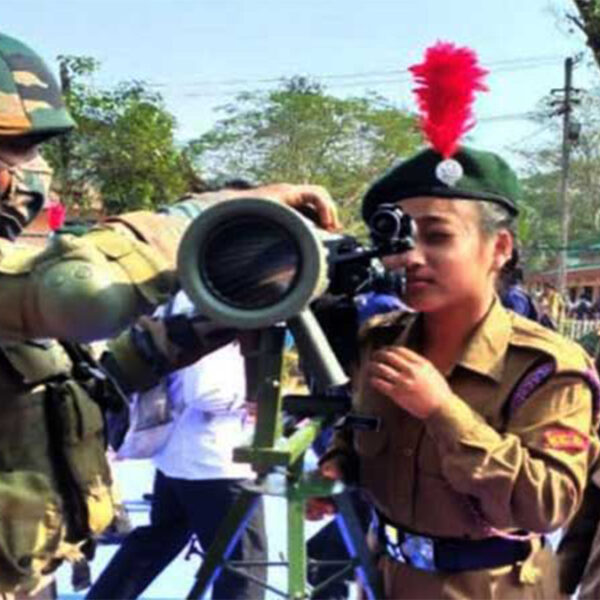 Several hundred college students, mostly young girls, expressed their desire to join the armed forces after taking part in a ‘weapon display’ event organised by the Army here in Jammu and Kashmir’s Doda district on Sunday. The ‘Delta Force’ of the Army organised the weapons’ exhibition for the students to motivate the youths, especially the girl students of Chenab valley region, to join the force, an official said.

“It felt amazing physically touching the weapons for the first time in my life and now onwards my aim is to join the Army and to protect my country on borders,” Irtiqa Bano, 19, a student of government degree college, Thathri, told PTI. Bano was among 275 girl students who came from 12 colleges of Chenab valley region (Doda, Kishtwar, and Ramban), Udhampur, Rajouri, Poonch and Jammu districts to Bhaderwah Campus of Jammu university to witness the exhibition, Academic Coordinator, Bhaderwah Campus, Dr Kuljit Sing said.

Girls, especially from remote areas of Chatroo, Ramnagar, Kilhotran, and Thathri were seemingly thrilled to hold a weapon for real. “I felt frightened seeing the weapon and had never thought of joining the Army which is dominated by men. But now, I am excited and feeling proud of our army which has virtually come to our doorsteps to make us aware about the force,” said 18-year-old Riffat Amin, a student of government degree college Chatroo, said. She said that after coming to know that a woman can also join the army, she is willing to be part of the armed forces to serve the nation.

For 19-year-old Ashita, a student of Government degree college Parade in Jammu, the event reflected the efforts made by the army towards women empowerment. “My notion that only men can bear weapons was proved wrong, as I found it is very easy to handle any rifle or heavy weapon. We can do it and join the army for our better future,” she said. Apart from weapon display, a lecture was also delivered by Commanding officer 4-Rashtriya Rifles Colonel Rajat Parmar which saw enthusiastic participation from the students.

“It is heart-warming and really encouraging to see the enthusiasm of girl students from remote and interior colleges at weapon stalls, especially their keenness to know how to handle and use them against the enemy,” Colonel Parmar said. He said military display of weapons has been a usual way to instil a sense of pride and faith in the hearts and minds of the local populace.

“This initiative of Army will take women empowerment to next level as by knowing that they can also join armed forces and by getting the first hand experience to handle the latest weapons will surely boost their confidence level and provide them the required kick to join hands with the male counterparts to protect our country,” Dr Rubiya Bhukhari, a faculty member at Jammu University’s Poonch Campus, said