“A campus cannot help a student throughout their life to build a career. Building a career depends on your talent.” 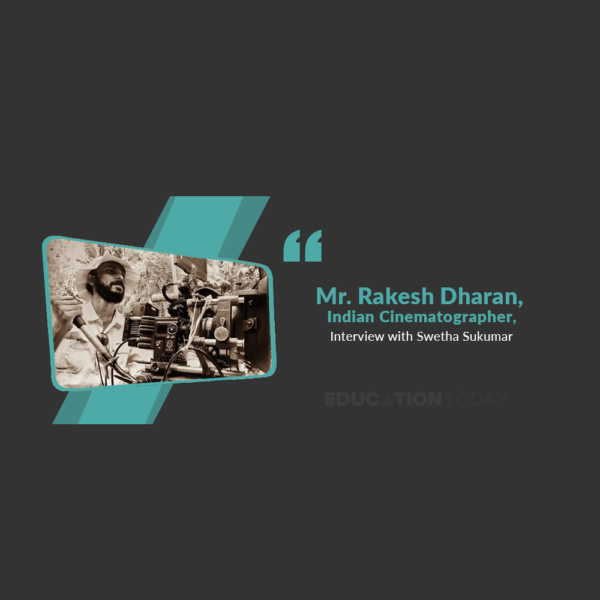 You entered the film industry after completing a Master’s degree in Cinematography at the Satyajit Ray Film and Television Institution in Calcutta. How was that journey to the first movie?

I did my Masters at Satyajit Ray Film and Television Institute. Before that, I was studying a three-year degree course in Visual Communication at Kerala University. That was the foundation course for me, and I learned more about the possibilities of cameras. Before that, I had zero background in photography and did not have any connection with the film field. So, this Visual Communication course has helped me a lot. We had a lot to learn in this course like photography, editing, sound recording, etc and we studied different aspects of filmmaking in totality.

I have not had the opportunity to work in the film immediately after I graduated. Later I worked as an assistant cinematographer in Bengali films. Indranil Mukherjee and Shirsha Ray are the most senior cinematographers in the Bengali film industry. I came to this field by working as an assistant in their films. I had the opportunity to work with Aparna Sen in her movie Sonata, and also with Sandeep Ray, son of Satyajit Ray. Also, worked as an assistant to Regis Blondeau in the French film Fahim.

When did your liking of camera begin and what pushed you to choose cinematography as a profession?

Everyone in my family loved photography. My father would encourage me in photography. For the first time, my father bought me a very basic model camera to study photography. That was my first exposure to the camera. At that time I did not know much about photography. When going out or going on an excursion, I could take photos randomly. On some days, if the light is good, the photos will be very pleasant. And sometimes the opposite would happen and I was wondering why this was happening. I was curious to see if the photos I took would look like this until I gave the film for wash and got it back in my hand. That was the first kick I felt in photography.

My father inspired me by saying that photography is a field that can be studied and that it has a lot of potentials. After that when I went to the Visual Communication course, I got a mentor there. His name is James Joseph, a very senior documentary filmmaker and cameraman. He is the first to tell me about the process of image-making. For example, how to communicate with people through a photo, how important is the frame we put on storytelling, etc… Sir was really a mentor to me. When I was told that I wanted to study in film school, he would initially say, ‘No matter how many film schools we attend, our real-life experience is very important in making a film.

Those words of sir were true. When you come to the film industry, many of the things you learned in film school have to be unlearned later. The film industry works in a very different way. Actually, cinematography there is an academic part, as well as there is a practical part to it. No matter how much we have learned academically, our industrial growth will be practically the same as how well equipped we are to implement it.

My first preference for higher studies was the Pune Film and Television Institute. My second preference was the Satyajit Ray Film and Television Institution. The syllabus is the same in both these film institutions but I got admitted to the latter. The first reason I chose this institution is that I come from a middle-class family. For me, there was a situation where I could not afford an expensive course.

The second reason for choosing this institution was, in this course, they have only 12 seats. So, they were conducting the all-India level exams for these 12 seats. So, it was an advantage to be able to do the course at a low cost in these two institutions under the Central Government. That is why students are selected by filtering. They screen out the most talented and deserving students in a country. Therefore, all these 12 students are equally talented. Spending 3 years together with such students will increase our intellect and our level of observation. Knowledge sharing is done through it.

I had international batchmates and also people who hailed from different parts of India. So, the mix of all cultures is very different in how they behave with such people and how they think about it. So being able to work among a mix of people is another advantage. At the same time, film screenings are conducted as part of the course. They daily screened a classic movie. After watching movies, discussions are held about them. The Film School is a great platform for such open discussion.

At the same time, as it is a central government institution, they provide a lot of the most modern equipment for students to study. The film school offers classes to students in equipment such as Arri Alexa and red cameras. We first started working here on film stock. It is a medium that is very expensive. When we study in such central government institutions, we get exposure like going to the top film labs in India and watching it being processed. There are a lot of opportunities at film school, such as screening films on campus and film directors sharing their experiences with students. This does not mean that students who didn’t crack these entrance exams are talentless, there are also several other institutes where you could pursue this course.

Are there more job opportunities for those studying at a reputed university? What is your opinion?

I believe it all depends on your talent. It does not matter where we studied. In the future, are you a filmmaker is all that matters. That is what we need to find out. A campus cannot help a student throughout their life to build a career. Building a career depends on your talent. A lot of people ask me about my job, and how much the salary is. This is a well-paid job, but if you want to reach that level, you have to go through a lot of struggling paths even after studying in a film school. No institution can guarantee that you will get a job or become independent as soon as you graduate.

For the first time in Malayalam cinema, the potential of the robotic camera is being identified through Anwar Rashid’s Trance movie. Working experience with that film.

Actually, Amal Neerad was our senior in film school. I assisted Prashant Raveendran in the movie Kattu, which was my first Malayalam movie. After that, I took a gap and was doing my own documentaries and short films. Then I had a desire to be part of a movie on a large scale. That’s how I met Amal Neerad. At the time, Anwar Rashid’s movie had an assistant cinematographer’s opening. So, I got a chance to work with Amal Neerad.

The Bolt is the robotic camera used for that movie. At that time there was a reason to use that camera in Malayalam. You can understand when you see the shot taken in that movie; we used that camera at a moment when Fahad Fazil is a bit psychic. This was the equipment used to take falling shots in advertisements. Not only Bolt but also the Sony Venice camera used in the Hollywood movie like Avatar is used in this movie. When you work with Amal Neerad, you can learn more about the technicalities.

Keedam is a movie that is currently running in theatres with a lot of audience acclaim. Have you done any new camera experiments in this movie?

Keedam is a cybercrime-related movie, directed by Rahul Riji Nair. In this movie, there are a lot of night shots and we mostly used a camera called Red Gemini for shooting purposes. The camera is with low light sensitivity. we choose it according to each subject. Keedam has used basic visual style for storytelling. As the story narration was very straightforward, we were able to deliver the visuals as required.

Why is the education sector of our country not attracting the new generation?