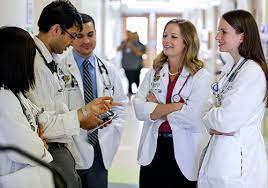 West Bengal Chief Minister Mamata Banerjee on Thursday said that medical students who had returned from war-ravaged Ukraine have been admitted to various medical colleges of the state. Engineering students who were forced to come back home because of the war were also accommodated at private colleges in the state.

Banerjee said, “Altogether 422 students have returned from Ukraine to the state risking their career. We had asked the Centre to allow us to accommodate them at different colleges. But the Centre said they cannot help them. They are asking the students to go to Poland and Hungary. How can they spend so much money again?”

Of the 422 returnees from Ukraine, 409 are MBBS students, three are in a dental course and one is pursuing veterinary course. While six are engineering students, three are labourers. “The six engineering students have been offered seats in private colleges. Two of them have joined the course while others are in the process of joining,” she told reporters. “One of the three dental students, who has completed his studies, will be doing an internship at a government dental college while the remaining two will be allowed in practical classes at the same college,” she said.

Out of the three workers, two have been appointed on casual basis at a district magistrate’s office while the third one has got a job and moved to Dubai, the CM said. Banerjee said that the veterinary student has been provided admission at the West Bengal University of Animal & Fishery Sciences. “A total of 23 sixth year medical students will be allowed to undergo internship at government medical colleges as per norms.

At least 135 students — 43 fifth year and the rest fourth year — will be allowed to undertake Observing seat at different medical colleges,” she said. As many as 172 third year and second year medical students will be allowed to attend practical classes, Banerjee said. She said that 78 first year students who are qualified for the 2021 session would be allowed for counselling immediately at “our private medical colleges against management quota seats for fresh admission. Colleges have been requested to offer concession in fees charged for these students”, she added.

Banerjee had on March 16 wrote to Prime Minister Narendra Modi requesting him to accommodate the medical students who returned from Ukraine in Indian colleges shortly after interacting with them in the city. She had urged Modi to relax norms for them as it is an “extraordinary situation”. In her letter to the prime minister, she had put forth several suggestions including allowing eligible students to undergo internships in government medical colleges.