Shiv Kunal Verma holds a soft premiere of his new series of illustrated books at PLF as part of his mission to introduce India to Indians (and the world). 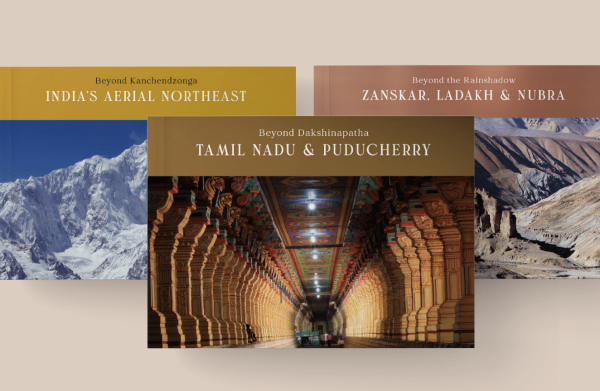 One Heritage Media pioneers new territory when it first publishes three brilliant books that spectacularly present various regions of the Indian subcontinent. This series of somewhat smaller-sized illustrated books is a part of the evolving “Value Education Programme,” a significant ground-breaking endeavour to raise the bar and significantly affect the Indian educational system.

The three big format volumes written by Shiv Kunal Verma, a prolific writer, photographer, and filmmaker, highlight decades of his committed work on numerous platforms. The three books, Beyond Kanchendzonga: India’s Aerial Northeast (Gold), Beyond the Rainshadow: Zanskar, Ladakh, and Nubra (Copper), and Beyond Dakshinapatha: Tamil Nadu & Puducherry (Copper), have layouts that are intended to improve the quality by printing in six-color metallic colours. These books are the flagship publications that the BluOne group is positioning to raise money for its primary Value Education Programme, which, according to Anirudh Chakravarthy, ‘is being designed to enhance the quality of education by bringing to our children, across the cross-section of society, world-class material that hopefully will open up their horizons beyond the classrooms.’

On August 5, 6, and 7, the Pondicherry Literature Festival will have a soft launch for the three Gold-standard novels. When reached by phone in Kullu, where he lives, Shiv Kunal Verma— anticipated to be in the city by today evening—said he was thrilled to be returning to Puducherry, which also appears in one of the three books. He recalled travelling to the city in the early 1980s while holding onto ropes on top of vehicles after completing his undergraduate studies at the Madras Christian College. He remembers that “Pondicherry was like a magnet,” and “we absolutely adored the location,” adding that “whenever we got an extended weekend, we would take off.”
Kunal graduated from The Doon School, Dehradun and Madras Christian College. He was a journalist for India Today and the Associated Press in the middle of the 1980s. From 1980 through the 1990s, he produced and directed a number of movies, mostly for the Armed Forces, working as a cameraman to document the Kargil War. He has been in charge of the landmark Welham Boys’ School, Dehradun, Military History Seminar for the past six years. Shiv has established himself in the realm of artistic writing and graphic representation of emotions and history thanks to his rich heritage