When We All Vote, Michelle Obama’s initiative, brings together cultural leaders from many industries for the first Culture of Democracy Summit 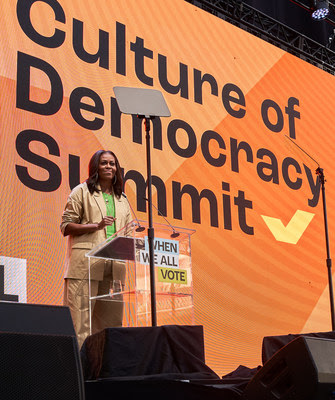 When We All Vote co-chairs Chris Paul, Selena Gomez, Liza Koshy, Bretman Rock, and Kerry Washington, as well as former Attorney General Eric Holder, Magic Johnson, Doc Rivers, David Hogg, and others, sponsored the inaugural Culture of Democracy Summit beginning June 10th. Artists, athletes, academics, grassroots activists, and corporate executives gathered for a four-day nonpartisan gathering to debate the role diverse industries play in safeguarding and enhancing democracy through voter registration, education, mobilisation, and culture change. For the Summit’s last day, about 1,000 people gathered at the Banc of California Stadium in Los Angeles. The complete roster of speakers, as well as livestreams from both events, may be seen here. Members of the media can access photos and video material here.

Announcements from the Summit:

Lyft announced on the closing day of the Summit that it will award transportation scholarships to Historically Black College and University (HBCU) students competing in When We All Vote’s VOTE LOUD HBCU Squad Challenge in the autumn.  When We All Vote collaborated with the Center for Media & Social Impact and MTV Entertainment Studios to produce groundbreaking research on how voting, civic participation, and civic leadership are depicted in popular entertainment. While TV programme characters are frequently portrayed discussing current civic and social concerns, they are seldom depicted taking leadership and acting to tackle civic problems in their communities, according to the study. Entertainment TV characters participate in voting behaviours in fewer than 1% of top-rated entertainment TV content, according to the study.This study and cooperation will be used by When We All Vote to establish a new effort aimed at diversifying narratives about voting, civic involvement, and public service. Leading entertainment executives, producers, and showrunners emphasised the role of civics in narrative at the Summit, including Adam Conover, Scott Budnick, Charles D. King, and Wanda Sykes.

Share. Facebook Twitter Pinterest LinkedIn Tumblr WhatsApp Email
Previous ArticleBasu believes that creative education and health will play a significant role in future economies
Next Article The Indian Education Ministry’s initiative to use ICT in school education has been recognised by UNESCO.