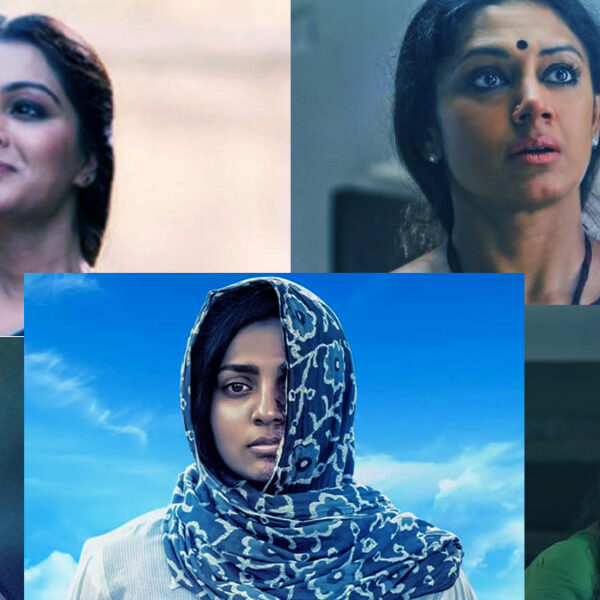 Cinema is one of the most popular sources of entertainment worldwide. It also called the seventh art, emerged as a modern variation of theatre. It’s in our days the spectacle that most audiences enjoy.

There are only male actors known as ‘super’ and ‘mega’ stars in cinema, and they are constant. But the female actresses come and go fast withered by age and wilted by gender constraints. In Malayalam, the male actors are still acting in a way that does not matter age. But when female characters leave the film industry after their marriage or a certain age, and when they come back to acting, it is a common sight that they only get ‘mother roles’. Women are not supposed to “act” once they get married seems an unwritten rule in Malayalam cinema.

Now Malayalam cinema and the audience are on the path of change. The heroines who returned to Malayalam cinema after a break through strong female characters are Manju Warrier in How Old Are You, Navya Nair in Oruthi, Meera Jasmine in Makal, Poornima in Virus, Samvrida in Sathyam Paranjal Viswasikkumo, Bhavana in Nte Ikkakkakkoru Premandarnnu etc. The Malayalam audience still accepts them as our heroines.

One cannot relate to the problematic of spatiality of women and Malayalam cinema without invoking the fate that had befallen P K Rosy. Malayalam cinema’s first heroine, P. K. Rosy, met a terrible end. She was a victim of patriarchal influences as well as caste discrimination. Rosy was a Dalit woman who, in her first and only film Vigathakumaran (1928) (The Lost Child), dared to emerge in the “public” realm of the movie screen and play the character of a Nair woman- an upper caste, causing a stir.

At both the national and international levels, Malayalam has received popular and critical attention. Not surprisingly, the most notable of which is the importance that Malayalam literature played in cinema. Malayalam film had the distinct advantage of having Malayalam literature’s leading figures, such as M.T. Vasudevan Nair, Thoppil Bhasi, Thakazhi Sivasankara Pillai, Ponkunnam Varkey, Uroob, Kesavdev, S.K. Pottekad, Parapurathu, and S.L. Puram, actively involved in the medium. Chemmeen, Neengal Enne Communist Aakki, Neela Kuyil, Kutti Edathi, and Oru Penninte Katha are only a few of their works that have been adapted into films. This is one of the reasons why Malayalam cinema has a unique place in the country’s celluloid world.

There are male directors who uphold feministic thoughts and values and have tried to present such thoughts through their film works. The female characters of KG George, Bharathan, Padmarajan and Adoor Gopalakrishnan were very strong. Now the baton is handed over to directors like Aashiq Abu, Roshan Andrews, Ranjith Shankar,Anjali Menon and so on. At the time when films like Naalu Pennungal, Rani Padmini, 22 Female Kottayam, How Old Are You, and the many other films present strong female characters to the Malayalees. Malayali society was transforming, economically and socially, and the daring film-maker looked to challenge the patriarchal authority during these seismic times.

KG George’s Adaminte Variyellu is the biggest feminist film ever made by a Malayalee. Dirty Picture, Fashion, Kahani, English Vinglish, Queen, Revolver Rani and Mardani are some of the films that have proved that women-centric films can also make box office hits in Indian cinema. There are many such films in Malayalam as well. The latest film Oruthi, Varthamanam, The Great Indian Kitchen, Uyare, Take off, Neena, Udaharanam Sujatha, is an example. 22 Female Kottayam, Om Shanti Oshana, How Old Are You, Zachariyayude Garbhinikal, all of these. Queen is a girl’s struggle with male – centered North Indian wedding customs.

Malayalam films has always been ahead of its time. We’ve recently seen powerful female characters on screen that are living lives on their own terms. Breaking the stereotype of a “good Indian woman”, the Malayalam film industry has taken the lead with films like 22 Female Kottayam, Kalimannu, Sara’s, The Great Indian Kitchen among others.

The female characters of some Malayalam movies like Bhanu in Kanmadam, Devika in the movie Pathram, Elsamma in Elsamma Enna Aankutty and Neena in Neena all have one thing in common. These characters are portrayed as those who should be born male and those who are brave. The point is that the woman received not only the boldness of femininity but also the respect of the sworn oath. If female characters who are no longer like that do not acknowledge male dominance, it becomes a woman’s own arrogance! The journalist in the movie Munnariyippu and the IG in Drishyam are examples of this.

From the time of silent cinema, it has been noticed how Malayalam cinema portrays femininity. Most of the films in Malayalam cinema prove that in order for feminist films to be born, men have to stand on their own two feet. For example, when confronted, the heroine Nirupama in How Old Are You is replaced by her own husband. In 22 Female Kottayam, the situation is similar.

By analysing the cinema and the characters of this cinema it obvious that women are represented as weak, dependent, sexual objects to be gazed up on in this cinema. It has to be said that many filmmakers do not give importance to women-oriented films that reflect a woman. Many Malayalam directors and newcomer directors have started following the path of change. An example of this is the new movie Archana 31Not Out. We need an environment where men and women can work without distinction.