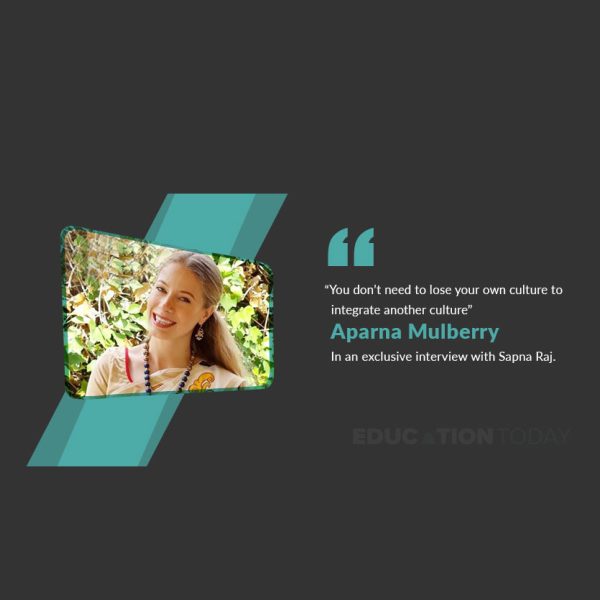 Aparna Mulberry grew up in Kerala learning Malayalam. She shows her love for the Malayalam language through her Instagram handle, https://www.instagram.com/invertedcoconut/?hl=en. Aparna has already captured the hearts of both Malayalis and non-Malayalis across the world. Aparna also gives English classes through the Entri App https://play.google.com/store/apps/details?id=me.entri.entrime&hl=en_IN&gl=US. Being a popular Instagrammer, YouTuber, and English tutor, Aparna shares her love for the Malayalam language, Kerala culture and, thoughts about Cultural Education with Education Today.

“Malayalam is a beautiful language. It’s like spoken poetry, that’s how I describe Malayalam to people who don’t know it.”

I think it’s really important for the children to have an idea of not only their own culture but the main cultures all over the world. So wherever they travel, they will have an idea of how to be respectful, and what not to do in a specific culture. In my case, when I traveled to India, I didn’t wear mini-skirts or tank tops but I wore Indian cloth to show my respect to Indian culture. So it is little things like these that make a big difference. For children too, being raised with the awareness of their own culture. Indian culture is so deep and known for its historic culture. It goes far beyond the days of Jesus Christ. Sanatana dharma was already an ancient religion when Jesus died. Therefore, Indian culture is so vast, and knowing some stories from Puranas,  Bhagavad Gita, Ramayana,  temple culture, India before and after the arrival of the British, and history are worthwhile.

Your experience of living in Kerala and your love for the Malayalam language? 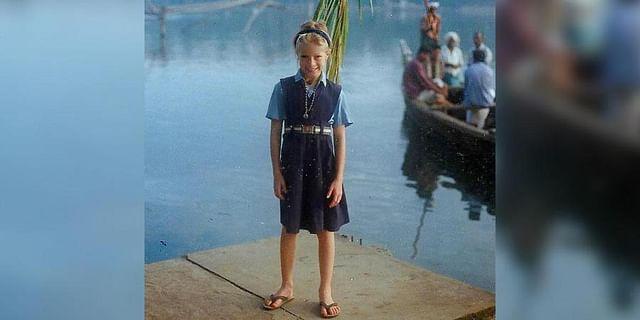 My family arrived in Kerala when I was about three years old and they have been traveling around India before that. They heard about Kerala and they brought me when I was three and went directly to Amma’s ashram which is the reason why they came to Kerala. They decided to stay at Amma’s ashram, they loved it and I had a lot of good friends and had amazing moments with Amma as a little kid. I will cherish these memories forever. It was a special childhood I had in Kerala at Matha Amruthanadamayi Devi’s ashram. When I started going to school, I was the only white kid in my school, and of course, that came with bullying. Actually, after learning Malayalam, that sort of bullying stopped. It was like the language was a barrier between me and other students in the school. So after learning Malayalam the barrier just vanished. I became one of them, we shared food, went to their houses, played together and we had a great time. It was great after learning Malayalam. Malayalam is a beautiful language. It sounds like a poem. It’s like spoken poetry, that’s how I describe Malayalam to people who don’t know it.

What do you love most in Kerala culture?

My favorite thing in Kerala culture is the very warm and accepting nature it gives to a stranger which is one thing I felt. When I speak Malayalam people seem to be very warm and helpful. They always want to help, are friendly, and have an open culture. But I know there are a lot of taboos when it comes to certain things. Kerala is still very much repressed in an open-minded way. You can be married out of your caste, out of your religion, or outside of your gender and that is a  reason for the parents to lock the doors on you for people to commit suicide. It still happens in the Western countries also but it is higher in India which is sad actually. Indeed, there is more to my love for Kerala culture. I also love the clothes and the different colors that you see everywhere. Everything is so colorful. The food is one of my favorite parts. I love spicy food and how they cook with coconut and everything is just delicious!

There is a lot to be said about this topic. Cultural exchange includes two different cultures or various cultures. Let’s see the case of America first. For example, in America, everyone practices yoga and meditation which is rooted and passed on from Indian culture even if they don’t know its spiritual meaning in-depth. They take many positive things from India. While people in India or Kerala gain western knowledge through movies and they have fantasy perceptions about western culture. They think America is the best country in the world and often ask foreigners why do they come to Kerala when their country is the best in the world. But the truth is different. There are so many mass killings, depressed young people in America. The only thing that I like more about living in America than of India is the freedom aspect. But American culture lacks certain factors like tight families, trust, safety, and so on. Both American and Indian culture does have many positives. However remember one thing, you don’t need to lose your own culture in order to integrate another culture. Losing your culture is such a miserable thing. Try to be proud of where you come from, the traditions you have, and your roots. The more proud you are, the happier and fulfilled you are going to feel in your hearts.

The curriculum should show both sides of the story. We should not fantasize about different cultures, realize the truth of both sides and then make a firm decision on what culture we want to represent or we want to assimilate to. Because the truth is oftentimes, we have no idea about what is on the other side.

I would also like to mention my English course for anybody who wants to become more confident while speaking English, how to formulate proper sentences and learn grammar. I teach simply and easily so that you will always remember it because I also speak Malayalam in my classes so that everybody understands. I also go in-depth in pronunciation of words, pronunciation accent coaching, the proper pronunciation of all the letters. The class is on a special offer now. You can join my course by downloading the ‘Entri app’.