Service Learning and Work-Based Learning Through a Pandemic 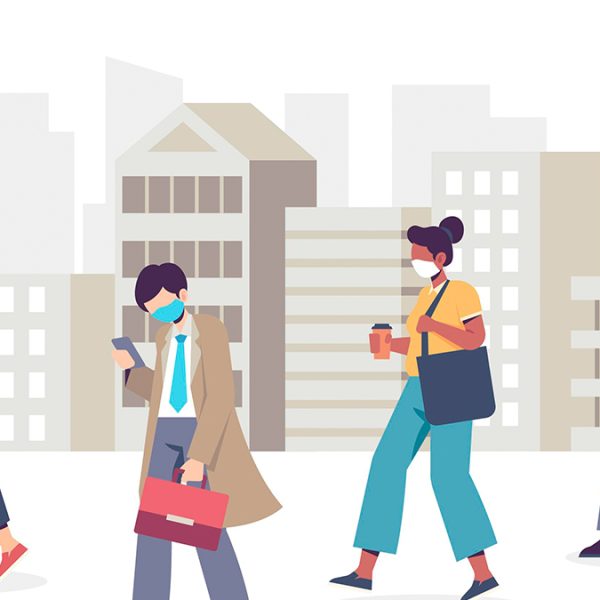 Restrictions alter student projects, but don’t dampen their enthusiasm to make a difference in their community.

When the pandemic virtually shut down any face-to-face interactions between people last spring, it looked like the volunteer program in a central Ohio suburban school district would be paused for the year.

But it turns out that with some tweaks to the annual program, not only were students able to participate, but in a way they became even more connected to their community.

“The students who were really determined, made it happen,” says Jeanne Gogolski, a service-learning coordinator in Ohio. In the past, students built houses around the world, worked with orphanages in Africa, and raised money and awareness for the Lost Boys of Sudan.

This year, students read books over Zoom for elementary students, ran errands for house-bound neighbors, and decorated a local park with inspirational messages, in addition to making masks for residents.

Community service “is part of the DNA of our community. It’s one of the reasons people want to live here,” Gogolski adds.

Last year, the state of Ohio changed its graduation requirements for all students, starting with the class of 2023. Students will now need to earn one of three locally defined “diploma seals.” Students can meet this requirement through sports, extracurricular clubs, work-based learning, or a community service project.

In a normal year, Gogolski’s students in middle and high school are required to spend at least six hours per year volunteering. That’s more than 3,500 students who need to find projects, keep track of hours, and have their work confirmed. The whole district uses x2VOL, which makes tracking and managing service easier for both students and school workers, Gogolski says.

The web-based tracking and reporting platform not only eliminates paper from the process and makes record keeping and verification much simpler, but its ease of use has also allowed the district to open more opportunities to students, the coordinator says. While many projects occur annually, any group looking for school volunteers can have their event information posted on x2VOL’s site, complete with contact information.

The platform allows the district to capture students’ reflections and also receive comments from organizers, Gogolski says. Because her program connects with their college and career readiness solution from Naviance, students and administrators can benefit from a single sign-on making it easier to manage student experiences with one login and password.

For those same reasons and more, the Educational Service Center of Central Ohio will use x2VOL for the eight counties it serves, says Christine Galvin, the agency’s director of college and career success. Many of the schools covered by ESSCO use Naviance and having x2VOL throughout the region will both allow her group to offer area-wide volunteer opportunities and share information about projects between districts.

The new state requirements also focus on work-based learning. Through work-based learning, students can discover new areas of interest, receive credit for their jobs, gain leadership skills, and ultimately grow as individuals through reflection on their experiences.

“I see x2VOL as a system where we can share regional work-based learning opportunities for students in order to collaborate and work regionally to widen employer partners,” said Galvin. “x2VOL can be utilized to help us share that information between districts.”

In her school district, the six-hour service requirement is just a minimum that many students surpass, Gogolski says. Once the pandemic limits pass, she expects the district’s number of students earning the President’s Volunteer Service Award to increase now that record keeping has become simpler. And this boost could lead to more students being eligible for post-secondary grants and awards, she says.

The reflection piece has helped some students make life-changing decisions, she adds, as they realize both what type of work they like and what profession they wouldn’t want to enter. “Some students realize they have a gift for talking to people, some students will work for the same organization for three to four years, creating relationships.”

One of Gogolski’s favorite volunteer efforts involved both high schoolers and fourth graders. The older students, as part of their environmental science class, taught the younger students about honeysuckle, an invasive plant. The younger students learned what it looked like and the damage it caused to the area. But it wasn’t until the whole group boarded a bus and spent a day trying to cut back honeysuckle in area parks, that the problem hit home.

On the bus ride back, both elementary and high school students pointed out all the places they saw the plant growing wild along the road, in the woods, and in neighborhoods. “That makes learning come alive in a way that is engaging and real,” she says.

But that project is far from the most inspirational she has seen. For the past eight years, Gogolski’s students have formed a partnership with the Lost Boys of Sudan, the roughly 20,000-person group who were displaced or orphaned during the Sudanese Civil War from 1987 to 2005. The group banded together to walk to safety during the fighting.

When several members of the group ended up at nearby Ohio State University, they came to tell their story to the students, Gogolski says. The students told of eating grass to survive and of friends who weren’t strong enough to climb trees when the lions came. “There were hundreds of students and nobody moved” during the presentation, she adds.

When students asked how they could help, the college students talked about how their villages were being rebuilt but were short on medical supplies. Over a couple of years, Gogolski’s students raised $60,000 for the group. The effort turned into a club at the high school and students who had graduated came back to explain what the work meant to them and how it shaped their view of the world.

“When those kids hear the word genocide, they have a different feeling around that,” she says.

One of the best parts of our requirement, says Gogolski, is that community service work can be done no matter a student’s academic or athletic ability. “Our students are on equal footing. Special needs kids aren’t exempt.”

Whether students are participating in work-based learning or service, they can track and reflect on their experiences molding them into well-rounded individuals.

“It’s available to every student at the high school,” she continues. And the work pays dividends far beyond those being helped. “When you’ve helped someone else, you’ve built your own social capital, filled your own bucket.”

Wayne D’Orio is a freelance journalist who writes frequently about education, equity, and rural issues. He is a regular contributor to The Hechinger Report. His byline has appeared in The Atlantic, Wired, Education Next, and Christian Science Monitor. Follow him @waynedorio.